It has been argued that the climate change would potentially increase the risk of forest damages caused by snow or wind. This has made snow and wind damages a topic of interest in the silvicultural debate as well. As to what exactly the damages are, generally speaking storm wind damages may be anything from single felled trees or tree groups to the quite exceptional cases of larger areal damages, such as in the case of Asta storm in 2010. The economic aspects spur forest owners to mitigate the risks of damages in their forest through proper silviculture practices. To lower the risk for further damages and economical losses, it is necessary to detect the damaged areas for timber harvesting after the damage occurrence. One way of detecting the damaged areas is through satellite imagery.

In the recent EnviNavigator project by Bitcomp, the focus has been on detecting the forest areas affected by wind damage utilizing Sentinel-1 SAR image data provided by the European Space Agency ESA. Satellite remote sensing aided interpretation of damages appears a feasible approach because of its large areal coverage and because the image data is acquired multi-temporally (based on multiple time series). Furthermore, the availability of SAR image data is quite stable even during the winter months and cloudy periods, which builds up expectations for the active SAR satellites as image sources. All aspects considered, the Sentinel-1 SAR satellite images were more than apt to be utilized in the exercise for detecting wind damaged forest areas done under the EnviNavigator project.

In January 2019, using the satellite imagery became topical as the Aapeli storm hit the Vaasa region, located on the western coastline of Finland. It was known that a set of multi-date images – that is, a time series of SAR images – was needed, as this kind of approach had previously been reported usable for snow damage detection with Sentinel-1 SAR image data. To aid the analysis in the Vaasa region, Forestry Centre of Finland made field plot measurements (98 located forest field plots). Plot material allowed testing the feasibility of approaches like plot-level analysis or stand-level analysis of the damage. 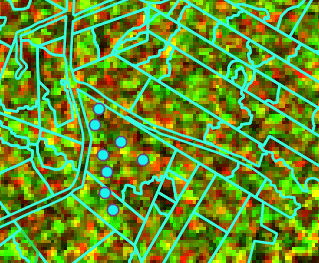 Days with the storm winds had taken place in the beginning of January 2019. Therefore, a time series of Sentinel-1 images from December 2018 and January 2019 was used. Open forest data sources were also utilized as an auxiliary source of information, as were the forest use declarations of the area. The objective of the exercise was to build an approach to detect the damaged areas and to further guide operational forestry and forest harvesting.

Challenges of the interpretation work stem from the very nature of SAR data. SAR image observations include random scattering (speckle) that can lower the usability of image material, as do rain or snow conditions of the set time period. The time window for the image data can also show other changes that have come to pass in the region, so it cannot be too long to avoid appearance of, for example, conventional harvesting operations in the images.

In its core, detecting the wind damages is a classification task, where the objective is to separate the damaged observations (field plots or forest stands) from the undamaged ones. When building a classifier, the common steps include training material selection, model estimation – machine learning algorithms offer some alternatives – and model testing. After the classification model has been established, it is possible to apply it, that is, to run the classification for the target observations (forest stands or grid cells) covered by similar SAR image data. 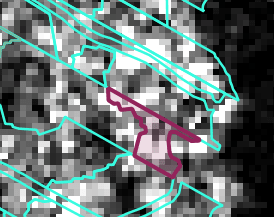 An example of classification result for a forest stand, where the area marked with violet has been classified as a damaged area.
Image window width is around 500 m on the ground. (Background: VH polarization 9.1.2019, ascending image.)

During the exercise, our experiences of the general usability of SAR image datasets appeared to be in line with the earlier results reported from Germany. It was also proven in this exercise that building a tool for an operational classification platform for wind damages based on SAR data observations is a demanding task. This case also increased knowledge in the field of SAR image data processing analyses. In the future, it would be necessary to investigate the usability of SAR images for other common aims in the forestry sector as well.

The role of the training and testing material (observations of forest state, for example field materials) is essential in these types of tasks. Therefore, the effort and co-operation of the Forestry Centre of Finland during this exercise project is greatly acknowledged and appreciated!

Research results to use – Supporting decision-making through multi-source...